Article from: Newsletter No. 90
Written by: James Witts
PDF: No article PDF

Following the ongoing success of the Lyme Regis Fossil Festival in recent years, September 2014 saw the first appearance of an equivalent in the north of England: the Yorkshire Fossil Festival, held at the historic Rotunda Museum in Scarborough.  Organised by the Scarborough Museums Trust in conjunction with the Palaeontological Association, the event is designed to run along similar lines to its older cousin on the south coast, bringing geology and palaeontology to the masses through a wide range of outreach activities run by different fossil-loving organizations.  For the second running of the Festival, over a long and uncharacteristically (for Scarborough!) sunny weekend in September 2015, volunteers from the universities of Leeds and Hull were joined by representatives from the PalAss, the Natural History Museum in London, York Museums Trust, Dinosaur Isle, the Geological Curators Group, the Geological Society of London, and Oxford Museum of Natural History among others.  As at Lyme Regis, the Friday of the Festival was given over to visits from groups of local schoolchildren, whilst on Saturday and Sunday the site opened to the general public.

The range of activities on show this year was particularly impressive.  In a single tent you could learn about the varied delights and uses of coprolites and trace fossils, examine specimens of fossil plants and animals from the Yorkshire Coast alongside examples of their nearest living relatives, and discover the huge importance of microfossils.  There was also an opportunity to view ‘Alan the sauropod’ (Yorkshire’s newest dinosaur described this summer by a team from the University of Manchester), learn more about William Smith and his pioneering geological map, and even take on the role of curator and curate your own fossil finds.  Several interactive public talks held at Scarborough Library also helped to keep the crowds entertained.  David Bond (University of Hull) gave an overview of the cause and effects of various Phanerozoic mass extinction events, while Alex Dunhill (University of Leeds) spoke about the dinosaur footprints that can be found on the Yorkshire coast, and what these can tell us about the animals that made them. 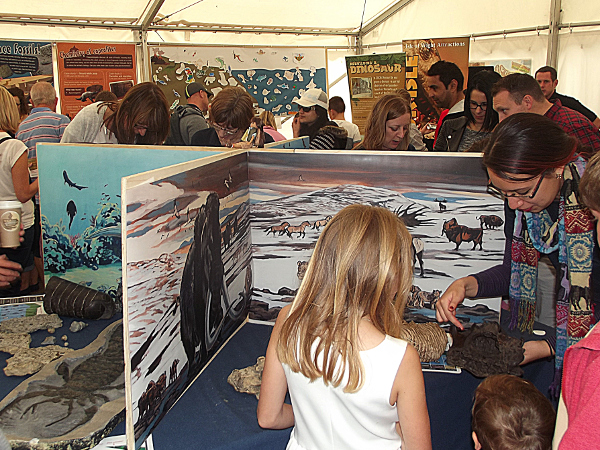 PalAss/James Witts
The Palaeontological Association’s contribution to the Festival, a ‘voyage back in time’ to four different time periods.

The PalAss contribution to the Festival was the same activity that we used at this year’s Lyme Regis Fossil Festival (see meeting report by Gemma Benevento in Newsletter 89), a ‘voyage back in time’ to four different time periods; a Silurian reef, a Carboniferous coal swamp, a shallow Jurassic sea, and Pleistocene ‘tundra’.  Painted reconstructions of these environments are joined by a wide selection of representative fossils, and information on what they can tell us about the myriad ways that the Earth has changed through the Phanerozoic.  The real appeal of this activity for me lies in explaining how you can take what, to the uninitiated member of the public, initially looks like a rather uninspiring lump of rock or fragment of a fossil, and use it to gain useful information about what the environment was like millions of years ago – be it sea level, water or air temperature, or even the composition of the ancient atmosphere.  Although palaeoenvironmental reconstruction using rocks and fossils is something we may take for granted, this is still an under-appreciated side of our science for most of the general public, who are fascinated to learn of the variety of ways we can use fossils beyond just describing new species of long-dead organisms.  The activity is also helped by its ‘hands-on’ nature as visitors are encouraged to pick up and handle the fossils.  Although this has led to a few dented ammonites and even disappearing trilobites at past events, I am happy to report there were no such casualties on this occasion. 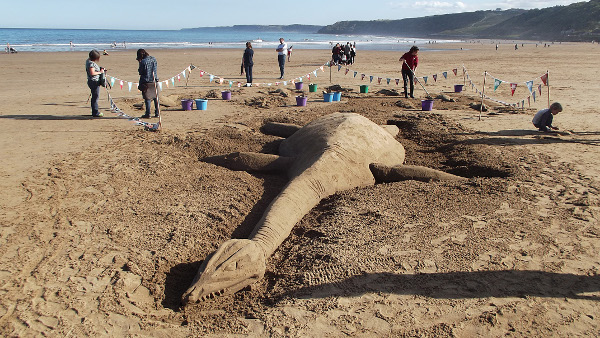 PalAss/James Witts
A beached plesiosaur basking on the sand in sunny Scarborough.

A team of PalAss volunteers, including undergraduate and postgraduate students, curators and academics (and even the Newsletter Editor and Publications Officer) were on hand to staff the stall, and we were once again joined by palaeoartist James McKay.  James challenged younger visitors to complete a fact sheet describing their favourite UK fossil by talking to various experts around the Festival.  Once completed, they returned the sheet to James who would then paint a picture of the animal.  This led to a great variety of fantastic reconstructions, ranging from giant Carboniferous dragonflies to Baryonyx, and even that most charismatic of UK fossils, the humble Gryphaea!  Beyond the more academic side of the Festival, there were also regular performances by ‘Horace the Travelling Pliosaur Cinema’, and a group of artists producing a musical about the life and times of William Smith.  Meanwhile, down on the beach an impressive school of plesiosaurs, some giant ammonites, and even a PalAss-inspired trilobite appeared on the sand courtesy of a team of professional sand sculptors, ably assisted by enthusiastic members of the public.

There were also numerous reports that a live T. Rex was to be found menacing the shoppers in Scarborough town centre in the direction of the Rotunda. 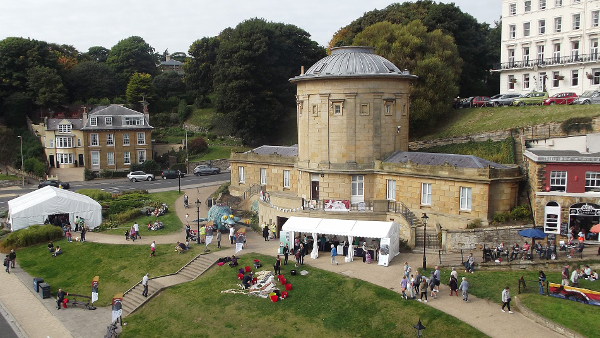 PalAss/James Witts
The Rotunda Museum in Scarborough and some of the Yorkshire Fossil Festival activities, including Horace the Travelling Pliosaur Cinema and a ‘blown-up’ version of William Smith’s original 1815 map on the lawn made using different coloured pebbles. 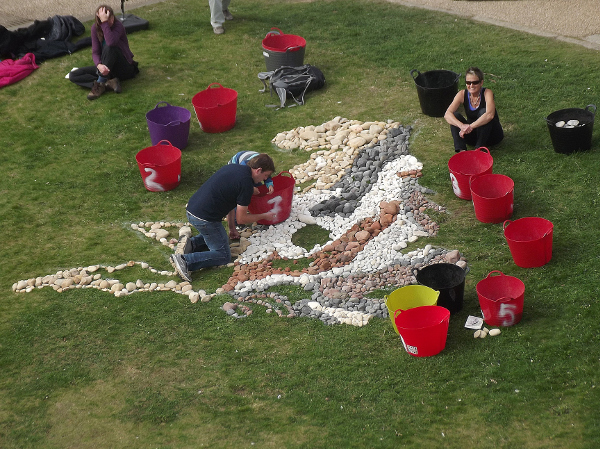 Many of the exhibitors chose to emphasise the bicentenary of the publication of William Smith’s geological map of England and Wales, helped by the connection to the Rotunda Museum, which Smith had a hand in designing during the time he lived in Scarborough.  One of the most popular of these activities, organised by volunteers from the University of Leeds in connection with local artist Sue Lawty, involved recreating a ‘blown-up’ version of Smith’s original 1815 map on the lawn outside the Rotunda using different coloured pebbles collected from the beaches of the Yorkshire coast.  Another testament to the popularity of any outreach activity where you can get your hands dirty – quite literally!  By Sunday afternoon it was obvious that the weekend had been another huge success, with Rotunda staff reporting that 10,553 people had visited the site over the three days.  It is hoped that the Yorkshire Fossil Festival can become a popular annual event in a similar way to that at Lyme Regis, whilst at the same time offering something a bit different.  For anyone interested in volunteering in the future, it is a thoroughly rewarding experience and a huge amount of fun, and our contribution always generates the PalAss a considerable amount of goodwill and good publicity.  I hope I speak for everyone who visited or took part this year when I say a huge thank you to all those people who helped put the Festival together.  See you in 2016!