Article from: Newsletter No. 87
Written by: Lucy McCobb
PDF: No article PDF

After nearly a decade of highly successful annual fossil festivals in Lyme Regis, Dorset, it was high time such fossil-based family fun and frolics found their way up north. So the inaugural Yorkshire Festival, from 12th to 14th September, was eagerly anticipated. Will Watts did a brilliant job of coordinating the Festival, which was organised jointly by Scarborough Museums Trust, Hidden Horizons and the Palaeontological Association, and hosted by the iconic Rotunda Museum in Scarborough, designed by none other than William ‘Strata’ Smith, ‘Father of English Geology’. The Festival attracted over 5,000 enthusiastic visitors, so hopefully the answer to the most frequently asked question of the weekend (‘is this going to be an annual event?’) will be a yes. 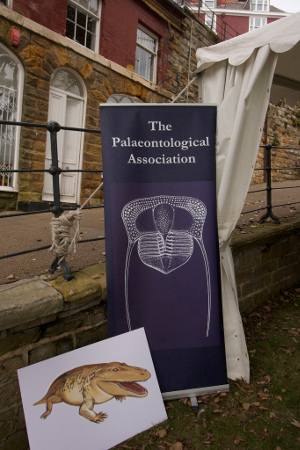 The PalAss stand featured a ‘When am I?’ activity, put together by Fiona Gill (Outreach Officer), Caroline Buttler (Education Officer) and Liam Herringshaw (Publicity Officer), working with artist James McKay (University of Leeds). James painted dioramas of four distinct ecosystems from different geological periods (Silurian reef, Carboniferous coal swamp, Jurassic sea and Ice Age tundra) and these were complemented by fossils from the collections of Leeds University and National Museum Wales. Visitors had to consult a chart depicting the Earth’s changing environments, faunas and floras through time, and try to figure out which period they had ‘timetravelled’ back to. The sensory impact of James’s stunning paintings was enhanced by sound effects, specially created for each period by University of Leeds postgraduate student Tom Fletcher (though the buzzing of giant Carboniferous insects tended to induce slight paranoia in those of us staffing the stand every time we wandered into the coal swamp). The other ‘time lords’ on the stand were Tim Palmer, Sally Thomas and Lucy McCobb, helping to whisk school children and members of the public back to a variety of palaeontological paradises or purgatories (depending on your views on giant reptiles and freezing temperatures).

Several primary school groups took part enthusiastically in the activity as part of schools’ day on the Friday. The afternoon of schools’ day was an opportunity for local sixth formers to explore the exhibits and discuss geological careers. There were plenty of degree options for them to consider, with the Universities of Leeds, Hull, Sheffield, Durham, Newcastle and Glasgow all represented at the Festival. 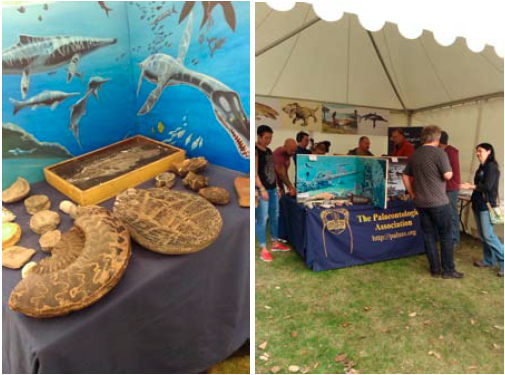 The Festival included two excellent and very topical talks. Professor Hugh Torrens gave a very interesting account of William Smith’s life and links with Yorkshire, ahead of bicentenary celebrations of the publication of his iconic map next year. Dr Mike Romano provided a fascinating summary of dinosaur footprints from the Yorkshire coast, many of which could be seen on display in the Rotunda Museum. The Yorkshire Geological Society led a special coastal walk to visit some of the sites discussed in the talk. Dinosaur fans had the opportunity to meet Dean Lomax, author of “Dinosaurs of the British Isles” and purchase a signed copy of his book.

The Festival also offered an opportunity for members of the public to visit the Rotunda Museum for free, and to join special William Smith walks led by Rotunda Geology Group.

Fans of reptilian intestinal cinema will be saddened to hear that Horace the Pliosaur gave his last shows at the Festival, but we hear that he will be reincarnated soon and look forward to meeting him in his next guise.