Behind the Scenes at the Museum: Lapworth Museum of Geology, UK

Article from: Newsletter No. 91
Written by: Jon Clatworthy
PDF: No article PDF

The Lapworth Museum of Geology dates back to 1880 and the foundation of Mason College of Science, the forerunner of the University of Birmingham, and is named after Charles Lapworth, the first Professor of Geology at the College and University. In 1880, the trustees of the College purchased a collection of around 1,750 Wenlock Limestone fossils from the Dudley area, from the local civil and mining engineer, Charles Ketley. From this point the Museum flourished under Lapworth’s influence and the collections grew considerably.

In 1900, Mason College became the University of Birmingham and eventually the Museum moved to its current site in the original Grade II* listed building at the heart of the University of Birmingham’s Edgbaston campus. No images of the interior of the Mason College Geology Museum exist, although later student recollections describe it as dusty, full of objects, giving the appearance of untidiness, but a hive of activity. The earliest photograph we have is of the interior of the Museum after it had relocated to the Edgbaston campus (Figure 1).

Today the collections contain in excess of 250,000 specimens covering most aspects of the geological sciences, including palaeontology, mineralogy, petrology, and there are also important collections of scientific instruments, geological models, zoology, comparative anatomy, archaeology and photography. The palaeontology collection includes material from many of the most significant geologists and collectors of the nineteenth and early twentieth centuries. There are representative collections from many Lagerstätten including the Burgess Shale, Monte Bolca, Mount Lebanon, the Green River Formation, the Solnhofen Plattenkalk and Mazon Creek. 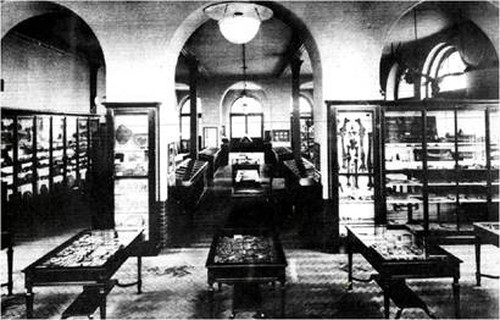 Lapworth Museum/University of Birmingham
Figure 1. The interior of the Geology Museum in the late 1920s having relocated from the city out to the Edgbaston campus.

Some key collections The Wenlock Limestone fauna is a key collection comprising approximately 20,000 specimens, mainly from the Dudley area. The finest individual collection was assembled between 1876 and 1897 by Sir Charles Holcroft, a very successful Black Country iron and coal master. It includes exceptional examples of the more common fossil groups (Figure 2) such as trilobites, corals, crinoids and brachiopods, but also some of the more unusual fossils within the Wenlock Limestone such as machaeridians, carpoids, cornulitids and rostroconchs. The Museum also has Holcroft’s beautifully hand-written ‘Fossil Register’, which contains a wealth of information regarding individual specimens. Holcroft purchased specimens from the quarry foremen, who, in turn, paid their quarry men for any interesting specimens they found. It demonstrates that when quarrymen’s wages were particularly low, the trading in fossils increased as the men tried to supplement their income. There are also many specimens in the main Wenlock Limestone Collection which were used in Murchison’s The Silurian System and Salter’s A Monograph of the British Trilobites from the Cambrian, Silurian, and Devonian Formations.

Lapworth himself became a world authority on graptolite faunas and was instrumental in showing their significance in biostratigraphy. His extensive graptolite collection was used to produce the definitive Monograph of British Graptolites, and contains many type and figured specimens; it is used regularly by researchers internationally. Lapworth also amassed a large collection of Lower Palaeozoic invertebrates from Shropshire, the Welsh Borderland and the Midlands. As is the case with many of our object-based collections, there is a wealth of supplementary information including Lapworth’s letters, photographs, maps, field sketches, field maps, notebooks, reports and catalogues. 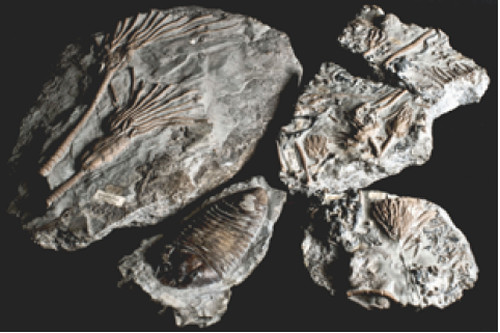 Lapworth Museum/University of Birmingham
Figure 2. Wenlock trilobites and crinoids from the Holcroft Collection.

The Carboniferous collection is centred on the flora and fauna of the South Staffordshire Coalfield. Of particular importance are the sideritic ironstone nodules from many different mines and collieries in the Black Country, particularly Coseley. These nodules, along with mudstone and coal, were often brought to the surface and spread out in fields to dry out. Local women, known in the Black Country as ‘pit bonk wenches’, were paid to pick out the ironstone, coal or other useful mineral material. They also put to one side fossiliferous nodules containing exceptionally well-preserved plants, and an associated fauna that includes horseshoe crabs, insects, millipedes, arachnids, crustaceans and fish.

Charles Lapworth’s archive is one of most important features of the Lapworth Museum and is regarded as one of the most complete archives of any Victorian or Edwardian UK geologist. It covers 60 years of his geological work from the 1860s up to his death in 1920, and comprises around 3,500 letters, approximately a thousand field and manuscript maps, and hundreds of field sketches, notebooks, consultancy reports in connection with applied and economic geology projects, and photographs. It contains his lecture notes spanning the period 1880 to 1913, combined with teaching aids, and examples of student notebooks from the same lectures (Figure 3). The archive provides a unique record of important advances made in the geological sciences, and the development of the science during an important period in its history.

A more unusual archive is that of Professor Fred Shotton MBE (1906–1990) who was a significant Quaternary researcher, but was less well-known in his role as a military geologist. His archive records how, during WW2, he was called upon to carry out ‘Top Secret’ work, initially to find water for the British Army in North Africa, and then during preparations for the D-Day landings and Allied advance across NW Europe. 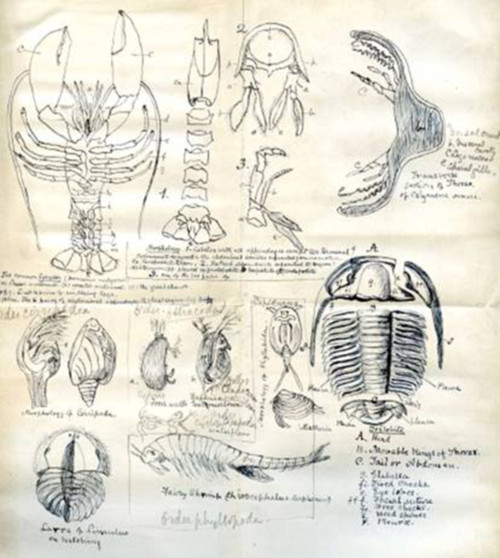 Changing times The Museum has supported teaching and research at the University of Birmingham, and its forerunner, for over 135 years. In more recent times, there have been significant increases in families, educational groups and retired people visiting the Lapworth. This growth, combined with limited exhibition space and user facilities, has led to the current £3m Museum Redevelopment Project, funded by the Heritage Lottery Fund, DCMS/Wolfson, Arts Council England, and the University’s Circles of Influence fund-raising programme. We are developing new exhibitions around the four key themes of Evolution of Life, Active Earth, Mineral Wealth, and Learning and Discovery. New galleries are being created and much-needed user facilities developed. The main hall of the Museum will become the Evolution of Life Gallery featuring more of our palaeontological collections, but we will also be able to display a significant amount of previously inaccessible mineralogical and petrological collections within the new Active Earth and Mineral Wealth galleries. ‘Wow’ features, such as a mounted dinosaur skeleton and a rock wall, are incorporated in the designs along with new innovative ways of interpreting the collections – these are exciting times for the Lapworth and its visitors!

Although closed since 2014, the Museum has continued to make the collections available to support teaching and research. The collections are used regularly to support final year undergraduate projects, with recent topics based on, for example, Eocene faunas from Sheppey, our ichthyosaur specimens, and fossil footprint material. The collections have also been studied in connection with Palaeontological Association funded initiatives, including an Undergraduate Research Bursary titled 3D photogrammetric imaging and re-analysis of a unique Late Carboniferous footprint assemblage from Shropshire. A recent PalAss Engagement Grant will investigate Gesture control technologies and palaeontology: exploring innovative outreach and education approaches using 3D fossil models.

The Lapworth Museum will re-open on 10th June 2016, and will incorporate the outputs of these recent projects in the new exhibitions. The redeveloped Museum will provide a fantastic public and academic facility, with a greatly enhanced visitor experience, and we look forward to welcoming you then.

Please see the the following for further details: