Behind the Scenes at the Museum: A whistle-stop tour of Norfolk Museums Service, UK

Article from: Newsletter No. 92
Written by: Orla Bath Enright
PDF: No article PDF

Located in a castle built between 1066 and 1075, perched atop a Norman mound, “Norwich Castle Museum can’t be missed,” says David Waterhouse, curator at Norfolk Museums Service.  Norwich Castle Museum is just a small part of NMS, which is now regarded as one of the leading bodies in the UK Museums sector. 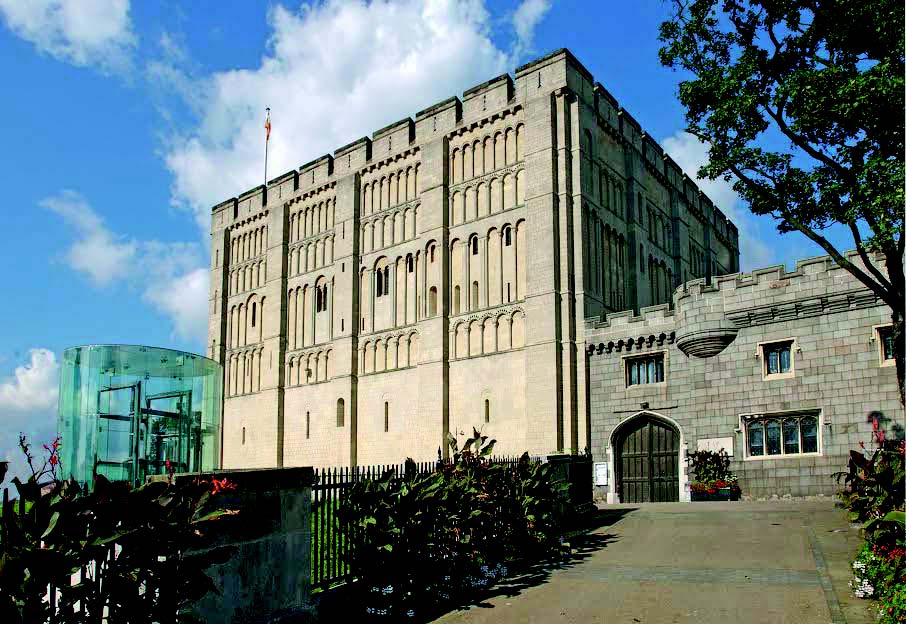 NMS was awarded “Major Partner Museum Status” in 2012 along with other museums in the UK, by Arts Council England.  It was established in 1974 when the County and District Councils in Norfolk delegated their museum powers to a countywide Museums Service run by Joint Committee.  The Norfolk Museums Service comprises museums, collection study centres and countywide services, which aim to enhance education, research and public outreach.  “Many of the initial collections were donated,” says David – over the past 180 years the collections have been built up by locals and the generosity of geologists.  As the sole member of the Natural History section at NMS, David deals with all natural history inquiries, “anything from fossil bones to plants”, an enormous task that sees over 800 specimen queries each year!

Today there are over 30,000 geological specimens (many of international importance) at Norfolk Collections Centre, Norwich Castle Museum and Cromer Museum.  The Norfolk and Norwich Museum was established in 1825 and transferred to Norwich Castle in 1894 to become Norwich Castle Museum.  Previously a medieval palace, the castle has entertained royalty but was later transformed into a prison.  The city of Norwich bought the building in 1887 and converted it into a museum; it was officially opened in 1894 by The Duke and Duchess of York.

At the castle you will find an array of specimen cases in the Natural History Gallery which contain Cretaceous echinoids, hyaena coprolites from the Cromer Forest-bed Formation, interglacial material including reindeer and hippopotamus remains, one of the largest flint ammonites ever discovered, and the West Runton mammoth vertebra and mandibles.  “The West Runton mammoth (Mammuthus trogontherii), was an exciting discovery – the largest and oldest mammoth to have ever been discovered in the UK – and comes from the West Runton Freshwater Bed.  Some of the material can be seen on display at Norwich Castle,” says David.  A local couple, walking along West Runton shoreline following a stormy night, observed a large bone partly exposed in the base of the cliff and contacted NMS.  The fossil was identified as the pelvic bone of a large mammoth.  This significant find, along with other material found the following year, led to the first excavation in January 1992, with another major excavation in 1995 (funded by the Heritage Lottery Fund, M.G.C. Prism fund and Anglian Water).

Although the mammoth is accessioned to the Castle Museum, the majority of the skeleton is currently housed in special storage at the Norfolk Collections Centre, Gressenhall Farm and Workhouse, near Dereham (also apart of NMS) and can be seen by appointment or on special tour days.  Exciting plans are underway to conduct a 3D laser scan of all the skeletal elements in the collection so that a full-sized 3D printed replica can go on display at the Castle, forming the centre-piece of impressive displays of the Cromerian Stage of the Pleistocene Epoch throughout Norfolk. 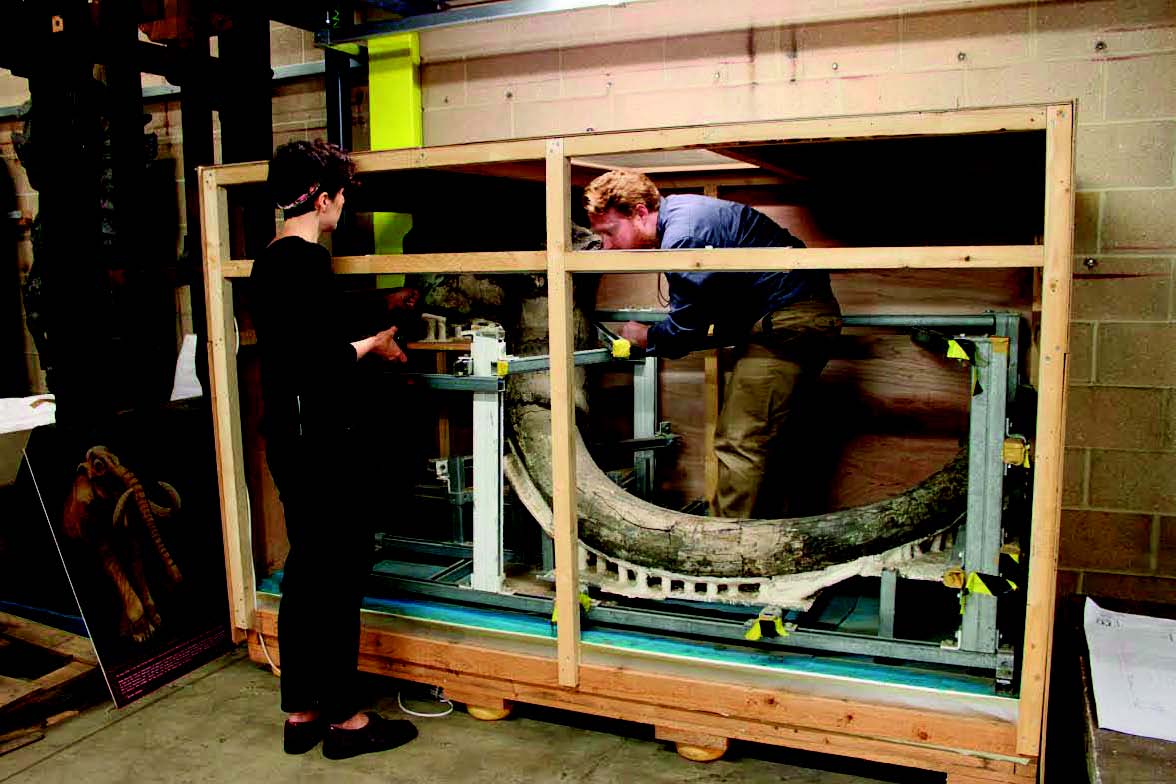 Included among the ten sites of the Museums Service is Cromer Museum which was established by Cromer Town Council when they bought a group of cottages in 1967.  It was over ten years, however, before the Museum saw the first visitor pass through its doors.  Due to an agreement when the cottages were purchased, the residents could stay as long as they pleased and it was not until 1978 that the Museum was declared officially open.  With the aid of a public appeal for material to be donated to the Museum, the collections have grown in size and content.  The largest collections of geological material within the NMS are on display here.  “These offer a gateway into North Norfolk,” says David.  The collections include Pleistocene megafaunal remains from the Cromer Forest-bed Formation and Norfolk Crag deposits.  The Crag collection consists of marine mammals such as cetaceans and walrus, as well as land mammals such as elephantids.  Material from the White Chalk Formation – some of the youngest chalk in Europe – also resides here, among which are belemnites, echinoids, mosasaur teeth and a replica of a mosasaur skull. 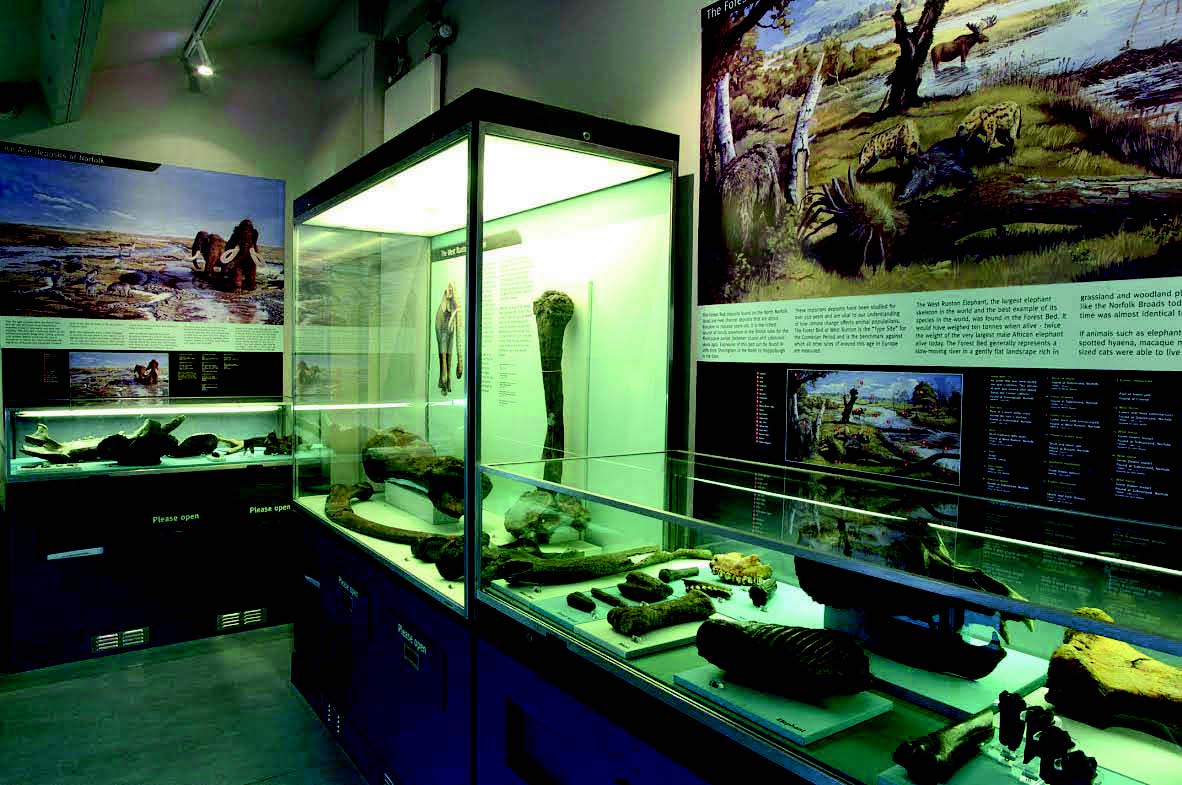 Cromer Museum received funding for a large re-development project during 2005–2006 which saw the addition of a new education room, shop and other new facilities.  There is an array of events held at the Museum as part of school outreach programmes, which include a ‘Mammoths, Monsters and Minibeasts’ day.  Other events handled by David and colleagues include their regular Fossil Roadshow, which engages members of the public of all ages.

The Cromer Fossil-bed Project, a joint project with the Natural History Museum and British Museum, has been under way since 2012 to develop a database including the location and inventory of material found at this site.  David has big plans for the future too, including a smartphone app for helping the public record fossil material and a website to accompany it.  At an early stage of project development is the ‘Deep History Coast’ tourism package, similar to the ‘Jurassic Coast’ in Dorset and Devon, which will “link the landscape to the material on display at our museums” says David.

David’s top three “must see” palaeontological objects/collections at the NMS are: