Fossils in the news, Spring–Summer 2016

Article from: Newsletter No. 92
Written by: Liam Herringshaw
PDF: No article PDF

Usually I keep an eye on palaeontology in the news, but for this issue I decided to broaden my scope somewhat, and monitor fossils instead.  A semantic difference, you might argue, but it seems many of our friends in the media remain rather confused about our discipline and its terminology, so I was curious to see what difference a change of search-word made.  The discovery in a Peterborough clay pit of both Eve the plesiosaur (now in the Oxford University Museum of Natural History: http://www.oum.ox.ac.uk/visiting/presenting.htm) and the Must Farm Bronze Age village (http://www.mustfarm.com/bronze-age-river/forterra/) enabled even the BBC to enter the realms of palaeontological-archaeological conflation (see e.g. http://www.bbc.co.uk/news/science-environment-36384054).  So what hope do fossils have of being correctly reported?

Well, to start with our own publications, the Palaeontology article by Lynn Harrell and colleagues on possible thermoregulation by late Cretaceous mosasaurs (http://onlinelibrary.wiley.com/doi/10.1111/pala.12240/abstract) attracted plenty of attention.  “Were dinosaurs WARM-BLOODED?” boomed our old friends the Daily Mail, in the inevitable taxonomic tangent (http://www.dailymail.co.uk/sciencetech/article-3580669/Were-dinosaurs-WARM-BLOODED-Aquatic-reptiles-living-Cretaceous-period-body-temperatures-similar-sea-birds.html), though they did at least make it clear that mosasaurs weren’t dinosaurs in the article itself.  Most other outlets that covered the research plumped for more appropriate terms, such as ‘aquatic lizards’ (http://www.redorbit.com/news/science/1113414010/ancient-lizard-warm-blooded-050916/) or ‘marine reptiles’ (http://www.techtimes.com/articles/156996/20160510/new-evidence-reveals-ancient-marine-reptile-mosasaurs-were-warm-blooded-creatures.htm). 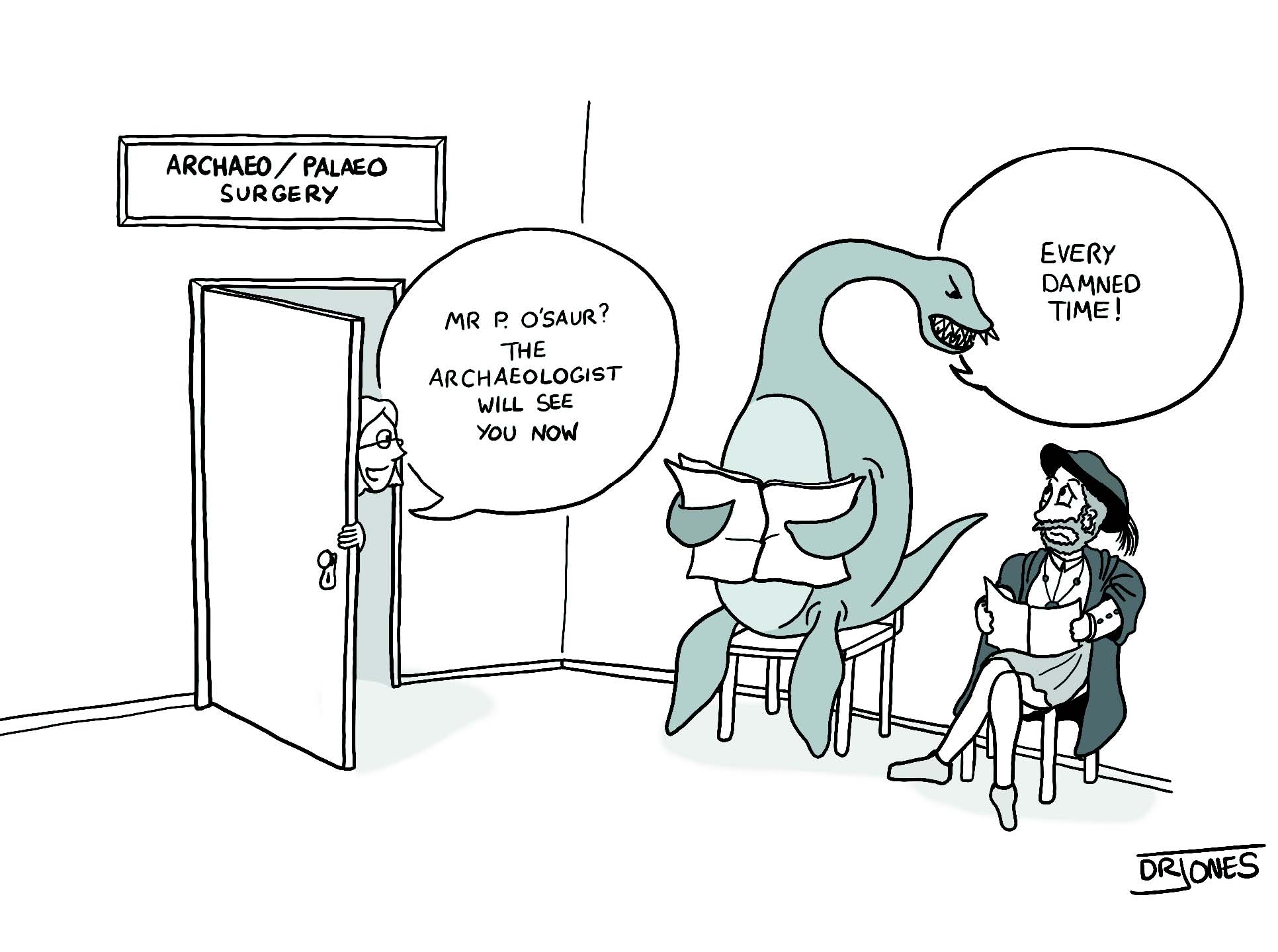 Whether Mesozoic squamates were warm-blooded is one thing, but whether NASA will find dinosaurs on Mars is quite another.  This probably wasn’t one of the key questions James Witts and his colleagues at the University of Leeds and British Antarctic Survey were setting out to address with their study of the fate of Cretaceous–Palaeogene molluscs in Antarctica (https://www.leeds.ac.uk/news/article/3871/antarctic_fossils_reveal_creatures_werent_safer_in_the_south); however, it was one of the more mystifying ones engendered by the publication of their work in Nature Communications, proposed by a venerable media outlet called Claptrap, sorry, Clapway (http://clapway.com/2016/06/01/antarctica-aliens-dinosaur-age/).  Maybe a submission to the next round of PalAss research grants is in order?

Out of order, and genuinely in need of closer scrutiny, is the apparent clamour for digging up the cliffs of East Anglia in the search for Pleistocene giants.  ‘Fossil hunters at risk of destroying Norfolk coastline,’ said the Daily Telegraph (http://www.telegraph.co.uk/news/2016/05/15/fossil-hunters-are-at-risk-of-destroying-norfolk-coastline-by-ha/), describing how mammoth-yielding cliffs near West Runton are being dug up by spade-wielding visitors.  Both the Norfolk Museums Service and the Geological Society of Norfolk urged people to show “common sense and decorum” whilst hunting for fossils.

Further up the east coast of the UK, a local housing association has been chopping down trees in Sunderland, turning them into ‘ugly, rotten fossils’: http://www.sunderlandecho.com/news/ugly-rotten-fossils-anger-over-plans-to-hack-back-trees-1-7924255.  One wag, commenting on the article, wondered whether the phrase wasn’t in fact referring to local politicians.  It seems outside of scientific parlance, ‘fossil’ is rarely used in anything other than disparaging terms.

I was happy, therefore, to come across a more positive story, and even more delighted that it linked palaeontology and cricket.  The glad tidings came courtesy of the Worcester News and their announcement that a local team of veteran cricketers, known as ‘The Fossils’, had claimed a piece of silverware: http://www.worcesternews.co.uk/sport/14521107.Veteran_cricket_team_Fossils_win_Peter_Tudge_Trophy/.  Even better, their star bowlers were called Cliff and Pete, which is surely a special kind of nominative determinism.  Elsewhere in sport, but rather less jovially, the members of a Scottish golf club elected not to permit women as members, leading the Herald Scotland to announce that ‘[t]he Muirfield fossils have sentenced themselves to irrelevance’ (http://www.heraldscotland.com/opinion/14508745.The_Muirfield_fossils_have_sentenced_themselves_to_irrelevance/).  The writer speculated that these “living fossils” (implying mysteriously that there are golfers preserved in the fossil record somewhere) also wished to “create an impermeable wall of stone” between themselves and the outside world.  That sounds a lot like biogenic sedimentology to me: perhaps the golfers have their heads in the sand in more than one way.

Staying (and ending) with trace fossils, then, the most surprising of all ‘fossils’ news was my discovery, via the New Historian, that “Ichnology has a new fossil” (http://www.newhistorian.com/ichnology-new-fossil-lepeichnus-giberti/6442/).  Even more remarkably, the ichnotaxon in question wasn’t a dinosaur footprint, but Lepeichnus giberti, a probable crustacean burrow from the Miocene of southwest Spain.  Named in honour of the much-missed Dr Jordi di Gibert, L. giberti is particularly noteworthy in that the complex burrows preserve evidence of the tracemaker’s ontogenetic development.  If the new concept of ‘ichnogeny’ doesn’t make it into the next round of news stories, I shall be most disappointed.