Article from: Newsletter No. 97
Written by: Lene Liebe Delsett
PDF: No article PDF

If the PhD supervisor is the academic equivalent of a parent, then Zofia Kielan-Jaworowska is the grandmother that I never met.  From my biological grandmothers I inherited my (lack of) height and love for ice cream.  When I read about Kielan-Jaworowska[1],[2],[3] I realize that perhaps I inherited things from her too: my interest in histological thin sections and pelvic girdles, as well as my love for science communication.  Kielan-Jaworowska was my supervisor’s supervisor, but she was also many other things.  Through her life story one can trace the 20th century history of Europe as well as the 20th century’s history of science. 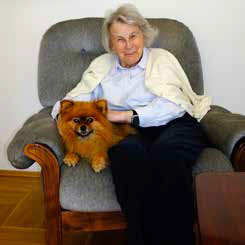 Kielan-Jaworowska was born in 1925 in Sokołowo in Poland.  The Second World War affected her country more than most, with millions of people killed and large parts of the capital destroyed.  This was a problem for her education, but together with other dedicated pupils and teachers she attended illegal education in Warsaw.  Eventually she fell in love with evolutionary theory and vertebrate palaeontology through volunteer work in the Zoological Museum, but it would take an impressive invertebrate detour before she would meet her favourite vertebrates: the multituberculates.

Post-war Warsaw was not easy for scientists, but even though the educational system was in constant change, she and her supervisor Roland Kovlowski ran several important research projects, and she finalized her doctoral degree on trilobites.  It was awarded in 1953, and in 1959 she managed to submit a large work on Ordovician trilobites just before giving birth to her son.  In between fieldwork and the polychaete jaw apparatuses she progressed in academia as a lecturer and researcher.

Poland remained behind the Iron curtain, but Kielan-Jaworowska recognized the importance of international cooperation and strategically built a large network with scholars on both sides.  She worked in Paris and visited the UK, the Soviet Union, Scandinavia and the USA on several occasions.  From 1980 it became complicated to stay in Poland because of her membership of Solidarity (a trade union), and when a professorship in Oslo was announced, she applied and went on to stay in Norway for eight years until she and her husband returned to Poland in 1995.  She worked and published until a few years before she died in 2015.

During her lifetime, Kielan-Jaworowska wrote 220 publications.  After finally getting her hands on some vertebrate fossils with the start of the Polish-Mongolian expeditions to the Gobi Desert, she was able to research what would become her largest contributions, on the evolution of early mammals.  She was the first female head of a dinosaur excavation expedition worldwide when she led these expeditions between 1963 and 1971.  These are regarded as some of the most important and impressive large-scale vertebrate excavations in the last century.

“Mesozoic mammals include the trunk and a bewildering bush of basal branches for the entire mammalian family tree”, she wrote together with her co-authors in 2004, in the large book on Mesozoic mammals (Kielan-Jaworowska et al. 2004).  No one questions the contributions she made in understanding this bush, as she chose to work not on the dinosaurs but on the minute mammals found in the desert.  Multituberculates are the most well-known group of Mesozoic mammals, and even though they have no extant descendants, existed for a very long time.  Most multituberculates were rat-sized, while a few were larger, and all had dorsoventrally compressed skulls with large orbits.  The multituberculates from the Gobi Desert were giving up some of their secrets because they consisted not only of teeth and a few jaw bones, but articulated skeletons and postcranial elements that made new reconstructions possible.  Kielan-Jaworowska used a multitude of techniques, and is especially known for her usage of serial sections through the minute skulls.  The access to postcranial material also led her to the pelvic girdle and she wrote in her autobiography that “the peculiar structure of the pelvic girdle was haunting me all the time”.  In a 1979 Nature paper (Kielan-Jaworowska 1979), she argued that the extremely narrow V-shaped pelvis was not compatible with egg-laying, and suggested that multituberculates gave birth to extremely tiny, live offspring.  Nobody has proven her wrong yet.

Throughout her lifetime, Kielan-Jaworowska witnessed an incredible development in vertebrate palaeontology as a science.  Her working years saw the introduction of SEM, cladistics and molecular methods, including the rock vs. clock debate.  In the second edition of the book Mammals in the Age of Dinosaurs, a wide and modern variety of methods are discussed.

Seen as a quite recent invention, Kielan-Jaworowska pioneered in her view on the spread of scientific results.  She insisted that the results from the Gobi expeditions be published in English to have a wider influence, and had open access as her principle as editor of Acta Palaeontologica Polonica.  Similar to many other palaeontologists she saw outreach to the public as very important.  In Oslo she was surprised at the old-fashioned exhibitions, and led their renewal, based on experience gained from setting up the large exhibitions based on the Gobi expeditions.

Zofia Kielan-Jaworowska did an impressive amount of work in her lifetime.  She was an active researcher and participant in the palaeontological community and is known as an extremely hard-working person with high demands whom it was rewarding to work with.