Putting the oo in news

Article from: Newsletter No. 96
Written by: Liam Herringshaw
PDF: No article PDF

Knowing very little about dinosaurs, I am frequently out of my depth as a palaeontological publicist.  The recent Yorkshire Fossil Festival in Scarborough, UK was one such occasion: assisting on the PalAss stand on the Schools’ Day, I was asked dozens of questions about extinct reptiles by small children, and couldn’t answer most of them.  I tried to divert the topic of conversation to Silurian invertebrate Problematica, but it didn’t work, so I just handed out stickers of Carboniferous plants and told the disgruntled urchins to harass my colleagues.

Similarly, a geological-but-non-palaeontological colleague at Hull recently asked me to vet his list of 32 candidate taxa for an upcoming Twitter competition, #DinoCup.  I had to look up about half of the names on his list to check whether they were real or not, and in the end, my primary editorial contributions could be summarized as ‘oo’, in that I had to point out that Stegosaurus had an ‘o’ in it, and Giganotosaurus had more than one ‘o’ in it.

It is wholly appropriate/inappropriate, therefore, that the only Association paper to have attracted much media attention this quarter was both dinosaurian and oological.  The study of oviraptorosaur egg geochemistry by Romain Amiot and colleagues (Amiot et al. 2017) was first published in Palaeontology at the end of June, and picked up immediately by Phys.org (Le Roux 2017).  The website article focused initially on the misleading name given to oviraptorosaurs, since it was now generally accepted that they were not the ‘egg thief lizards’ scientists had originally thought them to be.  The focus then moved on to whether oviraptorosaurs were warm-blooded, noting that the study’s lead author had concluded that they ‘had a body temperature at least as high as the [egg] incubation temperature.’ 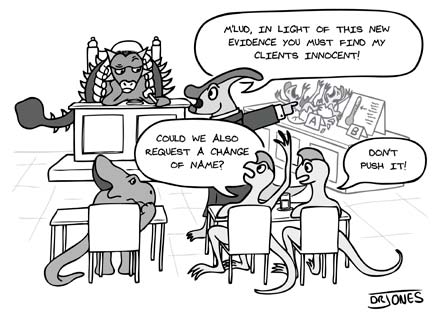 The other early birds to pick up on this cracker of a story were our old friends at the Daily Mail (Borkhataria 2017), who decided a ‘chickenosaur’ headline was in order.  Some of the accompanying images were a bit cartoonish too, but the nub of the article seemed at least to contain much of the information included in the press release, without deviating into the unfounded speculation one might have anticipated.

Things then turned confusing (at least to me), as, having published its own take on the story, Phys.org simply published the original press release the next day (https://phys.org/news/2017-06-brooding-dinosaurs.html).  The Daily Mail, meanwhile, waited a week or so, before deciding to provide a second summary of the oviraptorosaur paper, hidden inside a different story, about the owner of a fossil shop in Peterborough having apparently found some dinosaur bones in a brick pit in Surrey (Collins 2017).  One had to read many paragraphs of this article before finally stumbling upon a sub-section discussing the paper by Amiot et al. (2017), but I suppose two bites of the cherry are better than none at all.  This second summary was fairly inoffensive, but the comments section for the online article was not.  My favourite (publishable) footnote was the bold claim by one “Sassylassy” of York that “Dinosaurs never have and never will exist” [my italics].  Predictive palaeontology is the science of the future, and Sassylassy will unquestionably be there at the forefront of its development.

Last, but definitely not least, Inside Science offered up the headline that “the ‘Chickens From Hell’ were probably good parents” (Shurkin 2017).  It then went on to disparage the oviraptorosaurs as looking like they were “constructed by a malignant committee from spare bird parts”, and claiming that their mothers were ugly, though it did at least recognize that they stuck around long enough to incubate their broods.  Disappointingly, neither this nor any other of the media articles picked up on my favourite term from the scientific paper, and if you can’t crowbar ‘elongatoolithid’ into your copy, well, you’re a pretty bad egg.