Article from: Newsletter No. 95
Written by: David Bond
PDF: No article PDF

I write just days after Donald Trump pulled the USA out of the Paris Climate Agreement, whilst we in the UK are in the latter stages of a General Election campaign in which climate change has barely been on the agenda. We face an uncertain future in many ways, and beyond the White House there is widespread concern that Earth has entered into a new, human-induced mass extinction that will characterize the “Anthropocene” (Barnosky et al., 2011) (likely soon to be considered for ratification by the International Commission on Stratigraphy).

Earth is again facing the stresses implicated in its past mass extinctions, including marine anoxia, ocean acidification, warming, ozone loss and increased UV-B radiation, hypercapnia, acid rain, atmospheric oxygen depletion, and toxic metal poisoning, as well as unprecedented threats in habitat destruction and pollution. Most Earth and environmental scientists see these as “bad things” but the future of life on Earth is far from clear. Some think that a mass extinction is avoidable – let’s hope they’re right.

A new open-access paper in Scientific Reports by Emma Camp (Camp et al., 2017) of the University of Technology Sydney highlights that our understanding of biotic response to change is far from complete. Coral reefs are considered one of the ecosystems most vulnerable to climate change and other anthropogenic impacts, with predictions that 60% of the world’s coral reef area will be lost by 2030 (Hughes et al., 2003), or worse, reefs will suffer near-total destruction – with precedent in the geological past (Pandolfi & Kiessling, 2014). However, Camp et al.’s paper on “Reef-building corals thrive within hot-acidified and deoxygenated waters” offers some hope. Camp et al. conducted three field visits to a semi-enclosed lagoon system in New Caledonia (how dreadful that must have been!) and identified diverse coral communities growing in exceptionally hot, acidic and oxygen-poor waters. The 20 coral species observed calcifying in the lagoon have supposedly altered their metabolism and physiology to tolerate their extreme living conditions. Amazingly, the nasty cocktail of the lagoon exceeds in nastiness even the nastiest IPCC predictions for future oceans (Stocker, 2014), leading to the hope that some corals will be able to adapt and thrive. These so-called ‘Super Corals’ are suggested to be central to proactive management options aimed at upgrading reef resilience. I’m not so sure about that, but the study highlights the incredible resilience of even some of the most vulnerable taxonomic groups. 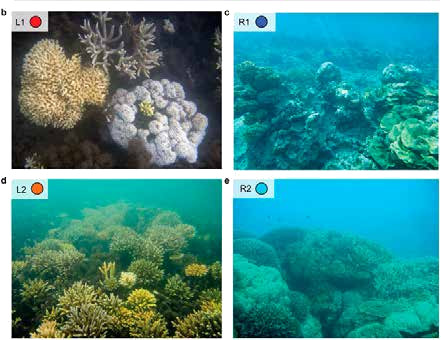 Given Earth’s current extraordinary rate of change, one wonders what proportion of corals (or any other taxa, for that matter), will be able to adapt, survive, or even flourish in the post-“Anthropocene” world. If 50% of species cannot, we do indeed face a mass extinction (using Jack Sepkoski’s definition). Predicting the future of life is a great challenge, but palaeontology and experimental (geo)biology must sit at the forefront of our response to change, as recently noted by Tony Barnosky (Barnosky et al., 2017). Palaeontologists have a key role to play in understanding and mitigating climate change because we, above all, understand how such scenarios have manifest in the geological past. If funding agencies want to know what the societal impact of palaeontology is, then they need look no further.