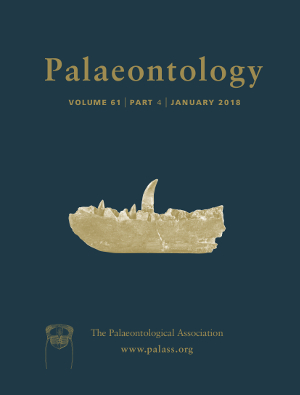 The first tunicates with a calcareous exoskeleton are reported from Late Triassic buildup‐slope deposits of the Dolomites. Although examples of this group have been known since the early 1900s from the middle–upper Permian of eastern Asia and Sicily as Khmeria, they were erroneously attributed to rugose corals. These early representatives are small, double‐valved, conical skeletons, which evolved into multi‐plated capsules with up to 35 opercula. The latter are joined along zigzag margins, which in life could probably be opened for the atrial and branchial siphons. The construction and shape of these skeletons distinguish them from plants or other invertebrate phyla, while they share several similarities with living tunicates, specifically to sessile ascidians. Apart from a soft‐bodied genus from the lower Cambrian of China, ascidians are known only from isolated spicules, which occur sporadically from the Lower Jurassic onwards. The calcareous skeleton of these Late Triassic tunicates consists of aragonitic fibres, which form spherulitic or clinogonal microstructures. It seems that the stellate aragonitic spicules of Jurassic to Recent ascidians are a vestige of Permian–Triassic ancestors, which after the Carnian lost the ability to construct compound solid skeletons but partly still retain a soft double‐valved or multi‐operculate cellulose‐like tunic. The following taxa are described as new: Order Khmeriamorpha with the genera Khmeria Mansuy and Zardinisoma gen. nov., and the following species: Khmeria stolonifera (late Permian), Khmeria minima (Late Triassic), Zardinisoma japonicum (late Permian), Z. cassianum, Z. pyriforme, Z. polyplacophorum and Z. pauciplacophorum (all Late Triassic).