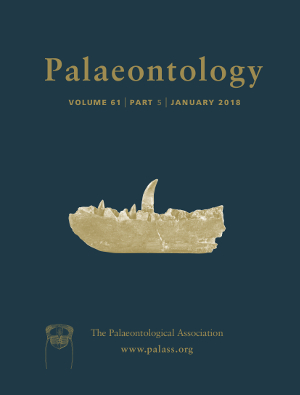 Phylogenetic relationships within the helcionelloid molluscs have been difficult to establish. One of the reasons for this is that qualitative approaches to investigating morphological variation in this group have struggled to identify clear patterns. An alternative method of identifying these patterns is to study these organisms quantitatively. Here this approach is exemplified by employing morphometric methods to investigate patterns of subtle morphological variation in two species of Mackinnonia Runnegar in Bengtson et al. from Cambrian Series 2, Stages 3–4. Specifically, a combination of elliptical Fourier and multivariate analyses were conducted to study intra‐ and interspecific variation in protoconch form as well as variation in ontogenetic trajectory of the teleoconch of two species of Mackinnonia. The material used consists of two assemblages of Mackinnonia rostrata (Zhou & Xiao), from the Shackleton Limestone of Antarctica and Ajax Limestone of Australia, and an assemblage of Mackinnonia taconica (Landing & Bartowski) from the Bastion Formation of Greenland. Results of this study show significant (p < 0.0001) differences in protoconch shape between all three groups. Ontogenetic sequences of outline curves truncated at successive rugae significantly (p < 0.05) discriminate between M. rostrata and M. taconica. These techniques uncovered significant intraspecific morphological variation of disparate assemblages of M. rostrata despite shared qualitative features and structure a conceptual framework for understanding such patterns of variation and put this in the context of the incipient species concept.