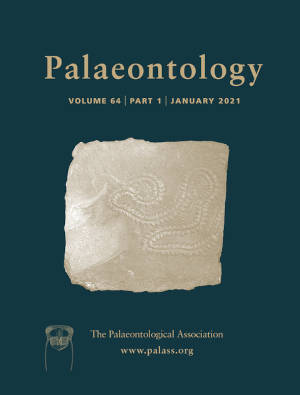 The Cambrian Period, primarily known for animal life diversifying, experienced global extinctions. Pulses of extinction in Cambrian Series 2 are exemplified by the disappearance of archaeocyath sponges and olenelline and redlichiid trilobites. However, the effect of such extinctions on outer shelf organisms, as typify Burgess Shale‐type (BST) deposits, remains relatively unknown. The phylogeny of naraoiid arthropods, represented in BST deposits globally, has consequently been reconstructed from either side of the Series 2 – Miaolingian extinction event to evaluate the response of offshore marine organisms to Cambrian environmental perturbation. As soft anatomy is known for only a subset of naraoiid species, exoskeletal morphology has proven important. Misszhouia and Naraoia (Naraoia) are distinguished morphometrically by posterior shield length/width and anterior shield length/posterior shield length. Morphometry has also been used to strengthen the identification of some cryptic naraoiid species and revise stratigraphic ranges. A revised naraoiid phylogeny reveals Misszhouia as a monophyletic subgenus, the former genus Pseudonaraoia nests within Naraoia and is placed in synonymy, and the systematic position and status of the Subfamily Liwiinae are sensitive to character weighting. Ten species of Naraoiidae range across the Series 2 – Miaolingian boundary, all naraoiid lineages originating during the main BST window. The persistence of outer shelf naraoiids throughout the Series 2 extinctions suggests that deeper offshore marine environments were resilient to extinction during periods of environmental stress. This study provides novel empirical support for the asylum of BST communities, which may contribute to the taxonomic longevity and widespread geographic distribution of taxa in these biotas.

This work was undertaken by ADB as part of an MSc by Research in Earth Sciences at RHUL, co‐supervised by Margaret Collinson and GDE. We thank Professors Margaret Collinson and Derek Briggs for providing feedback on early work that ultimately led to this publication. For facilitating study of naraoiid material via collections visits or loans, we are grateful to the United States National Museum of Natural History, particularly Mark Florence, the Yunnan Key Laboratory for Palaeobiology, with a special mention to Professors Yu Liu and Xianguang Hou, and the Royal Tyrell Museum. TNT was provided by the Willi Hennig Society. We thank the journal's referees, Nick Butterfield and Diego García‐Bellido as well as the journal's editor Sally Thomas for advice. This research was funded by the Kirsty Brown Memorial Fund Award as well as a research grant awarded by RHUL Department of Earth Sciences RMC.